The Third Iron dev team are long-time AWS users, but we recently tried Terraform to configure some servers. We found this tutorial to initially set things up, and that resulted in a server that worked, but only accepted non-SSL, port 80 HTTP connections.

After a few minutes of web searches, I could find no simple additional steps to enable https and get some Terraform-configured SSL. So this is the blog post I wish I could have found!

To get SSL working after the setup in that tutorial:

Instead of using the certificate_arn argument, we could have also created a new aws_lb_listener_certificate and assigned it to the new aws_alb_listener we created, like this:

If you just wanted the solution, stop reading now, and have a great day. 👋

If you want to learn more about how I reached this solution, including how the AWS Console GUI helped me figure out next steps in Terraform, and how I used a Zoom screen share from 2 months before, keep reading.

I had never worked with Terraform before this, but a teammate gave some training on it.

But that training happened over two months ago, so I had forgotten most of it.

Thankfully, I could go back in time.

Third Iron is a fully-remote team, so when we do screen shares, we frequently use Zoom. Before our Terraform training, we agreed to record the video for future reference.

I got my bearings back quickly after jumping around in it and watching only a couple minutes of its full 50 minute runtime.

Since Terraform seeks to make modifying infrastructure simple and painless, I thought I’d take our existing Terraform main.tf file and just experiment with some config changes.

After briefly looking at the docs for Terraform’s AWS Provider, including the one for the aws_lb_listener which we were already using because of the tutorial, I saw certificate_arn, which looked promising.

But references to load balancing were all over the main.tf file, and I had zero experience with AWS Elastic Load Balancing (ELS).

I also saw “target groups” in main.tf, and then realized I had no idea what that was. I felt like this dog, but more casual, since I wasn’t wearing a tie. 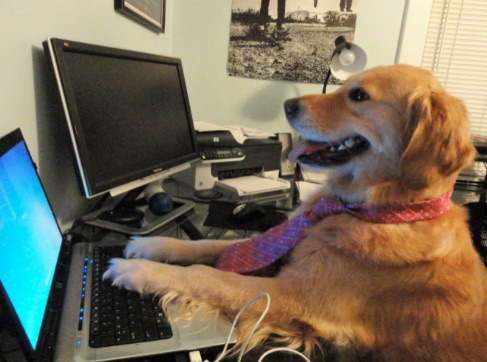 After proceeding to make some faulty assumptions about the relationship of a “target group” to a “listener,” I ended up really screwing up the server a few times.

But thankfully, I never got too frustrated, thanks to two things:

Unfortunately, in spite of experimenting a lot, I was still stuck. Sometimes I was getting “502 Bad Gateway.” Quick web searches showed load balancers and 502s frequently mentioned together, so I investigated ELB.

AWS Console GUI to the rescue

I looked for tutorials related to ELB, to see if I could get enough of a clue to make progress. One tutorial showed a screenshot from the AWS Console GUI that stated the Application Load Balancer (ALB) was great for http and https traffic.

I furrowed my brow, since we were already using an ALB, and I sure wasn’t having any luck.

But the article also showed a screenshot of creating an ALB from the AWS Console GUI.

What if I simply tried creating an ALB for http and https using the Console GUI? If I could make it through that process, I could compare that ALB config to what was in my Terraform config.

The ALB had a wizard, and I saw the issue in the config review stage: 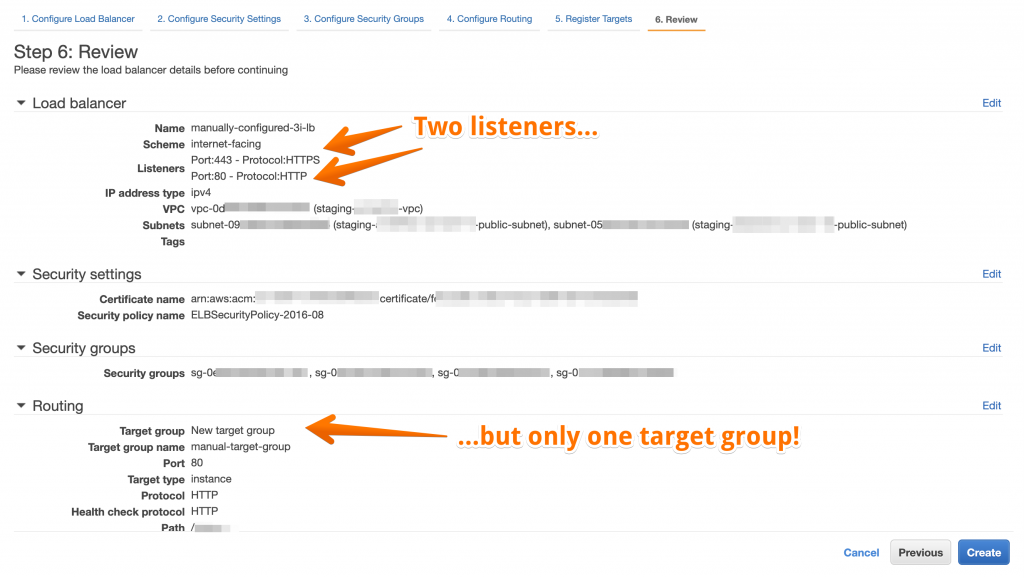 Because of my cluelessness on the relationship between a listener and a target group, I was creating a separate target group for my SSL/port 443 traffic. D’oh!

Turns out we can have multiple listeners in one target group. Stepping through Amazon’s wizard helped me understand that.

I quickly made a change to reflect this new information, and less than a minute later I had working SSL! 🎉🙌🔐

The AWS Console GUI has many step-by-step configuration wizards. Inspiration on what you might need to do next in Terraform could come from the GUI!

Have any questions? Reach out to us at devteamblog@thirdiron.com